All dogs and cats over the age of 5 months must be licensed annually. Proof of a current rabies vaccination is required to obtain a license. A license can be purchased at Village Hall or by mail.

Pets must be restrained at all times. Unlike dogs, cats and other pets must be kept on the owner's property. Every dog owner must protect people, property and animals from injuries or damage which might result from the dog's behavior.

Dogs are allowed in all parks and parkways. Dogs MUST be on a leash under control of the person walking the dog.

No person shall own, keep or have in his custody any dog which, by frequent and habitual howling, yelping or barking, or any cat which frequently and habitually cries or yowls, or causes serious annoyance or disturbance to persons of ordinary sensibilities or to the neighborhood,provided this subsection shall not apply to hospitals conducted for the treatment of small animals which are approved by the Health Officer, to medical universities, to premises occupied or used by the Wisconsin Humane Society or to premises occupied or used by the Village pound.

Every person, including the owner or person harboring or keeping a dog or cat who knows that a dog or cat has bitten any person, shall immediately report such fact to the Police Chief. 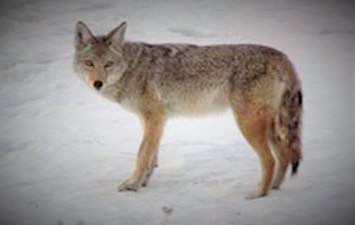 Coyotes have been living in Germantown for a number of years. They are found throughout the continental United States, Mexico and most of Canada, including most cities. Coyotes are one of nature's ways of controlling nuisance wildlife populations, such as rabbits, small rodents and deer. They generally stay away from people and there have been no reports of coyotes being aggressive towards people in Germantown or surrounding communities. As they adapt to living in a suburban environment, coyotes may be more comfortable around us but they normally will continue to avoid contact with people. During a recent Public Safety Committee meeting, the topic of urban coyotes in Germantown was discussed. In attendance was a biologist from the Wisconsin Department of Natural Resources who shared information on dealing with an urban coyote population. Below are some links on dealing with, and coexisting with a coyote population.